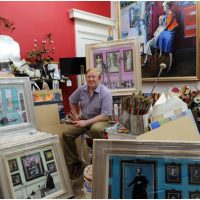 By Joe Hargan on October 21, 2016 in Uncategorized

Get daily news by email 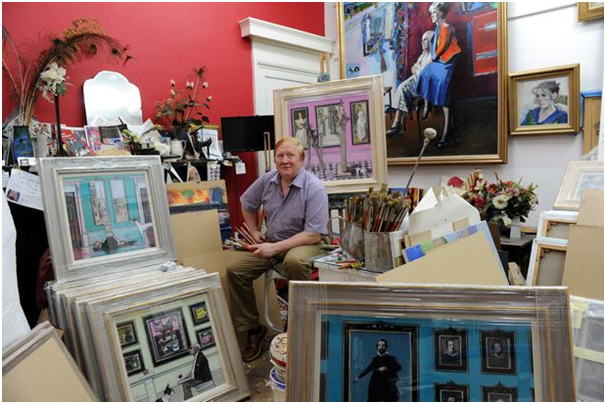 A retrospective of the work of a major Scottish artist opened last night.

Paisley-based Joe Hargan, 64, has been at the forefront of the art scene from more than 30 years and his striking paintings are bought by collectors from all over the world.

And now there is a chance to look back on his lifetime’s achievement in a exhibition at Glasgow Art Club.

Often large, often humorous in tone, and always strongly coloured, his paintings are eyecatching and memorable.

“There’s 50 pieces in this show from the last four decades, including a piece of work I did when I was 16, all the way through to the present work, and it shows the sort of diversity on what I work on.”

Born in Govan, Mr Hargan went on to the famous Glasgow School of Art and from there to a teaching job.

“I taught for a number of years,” he said.

“I taught in my old school St Gerard’s, in Govan. I did that for about 14 years, and I was at St Mungo’s in Glasgow, and then Belarmine in Pollok.”

The world of art began very early for Mr Hargan, who has long been a leading figure at Paisley Art Institute, and has his studio at his house in the town’s Oakshaw.

“I think it’s just one of those things. As a boy you start at the age of three and pick up a crayon and just make marks,” he said.

“My mum always used to say I was copying the words off a piece of paper.

“So I was always looking and transcribing a drawing.

“I think it’s something that’s inherent in everybody but we tend to educate it out, and especially in Scotland we educate it out of ourselves.”

It was in fourth year at school, however, that it became clear the young Joe had a real talent.

“I went to a place across from Rothesay called Castle Toward,” he said.

“They brought us out of school and they had two weeks for art people. That was my first exposure to others.

“The small world I had been in Govan was very limited.

kids from better backgrounds, and they were all doing these wonderful things.

“And that really then set me to raising the bar.”

At first, the young artist was doing representational drawings of what he saw in daily life as a means of learning his craft.

“I found it difficult to develop a style so early, because you’re basically learning off everything you’ve seen before” he said.

“And out of that constant working, keeping the process going all the time.

“People, say: ‘How often do you paint?’ and I say seven days a week and I have been doing it for 40-odd years.

And Mr Hargan’s ideas are, as he said himself, “quite diverse”.

“If you look at the show in Glasgow you’ll see the early work looking at the masters, the Velazquez’, the Rembrandts, Rubens and all that, you’re influenced by that.”

But by the time he left art school, his awareness had developed otospheres outside of art, such as the work of psychoanalysts Freud and Jung.

“You suddenly started looking at the underlying symbolism and metaphor you could put into an image, how you can convert ideas and other subtle poetic themes.

“There are fairytale paintings that are fun to do and the more latter stuff will work from things like that.

Joe Hargan’s striking works range from boldy coloured portraits to fantastical scenes such as a bath sitting on a grand piano. Often there are dogs standing stock-still and staring into space.

The overall impression is one of the fantastical.

But the artist says there is no such things as a typical Joe Hargan painting.

“I like to fire off ideas wherever they take me.”

Joe Hargan’s retrospective show is called ‘A Look Behind’ and will be at the Glasgow Art Club, 185 Bath Street, Glasgow, until November 12.