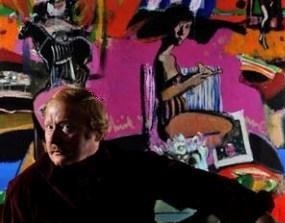 Joe Hargan is highly respected and stands out among Scottish artists as he rejects the pastiche (imitation) and is his own man, with his own unique artistic style – that is why his art is so interesting to his many collectors.

Joe is proud of the fact that his skills were honed in one of the greatest periods of Scottish artistic training; when drawing and painting and how to use materials were rigorously taught. He describes taking several hours to do a single study of a model in the morning and then being asked to do multiple fifteen minute paintings of the same model in the afternoon – the difference between a tight and a more energetic and spirited drawing. He asserts that many of his best drawings were when he used his instincts rather than use every last detail of observation.

You get some insight into how he has chosen to apply his training roots when he references renaissance art and the romantic period and uses such terms as ‘elegant’, ‘swashbuckling’ and ‘aspirational’.

Joe conjured up the character ‘Sniffy’, who looks bumptious but likeable and who has now become almost universally famous. In creating the personality, who someone suggested ‘looked a bit sniffy’, he was unaware that the character would provoke such a strong response and positive reaction. The character allows him to create humorous narratives or little playlets. He invites the viewer to pour over his studies and to work to interpret the various symbolic devices and metaphors contained within, what he terms his little ‘happenings’ or compositions. Sniffy is always in profile. He is unsure of where the Sniffy journey is going, or when it will end. Sniffy has been incredibly successful, but Joe does not want to be typecast – there is much more to his art and that is evidenced in the breadth of what he is prepared to tackle in his painting range.